Now the Pentagon is rolling out the Humvee’s successor, a 340-horsepower beast called the Joint Light Tactical Vehicle, or JLTV. And as a recent test ride at an Army training base made clear, it is leaps and bounds ahead of the Humvee.

The new truck, which began arriving at military bases in the spring, is faster, smarter and safer. It is powerful enough to bound through rough terrain, despite carrying armor so thick that the truck has to automatically level itself when parked, so that troops can swing open its 400-pound steel doors.

And unlike the stripped-down Humvee, the JLTV — which is far costlier than the latest Lamborghini Huracan — comes with a few conveniences, including a backup camera, phone-charging plugs, and not just one cup holder, but two.

“That may seem like a small thing, but not if you’re on a 10-hour convoy in the desert,” said Staff Sgt. Kelsi Anderson as she put the new truck through its paces.

Sergeant Anderson, an Army veteran of the war in Iraq, trains soldiers in how to drive the JLTV. Speeding through an off-road course in the rolling terrain of Fort McCoy, the truck’s sophisticated suspension devoured each bump and rut while her caramel Frappuccino, sitting in its holder on the dash, barely swayed.

Whether the new truck will actually be a better match than the Humvee for the conflicts of the future is a matter of debate. Some warfare experts see questionable value in simply adding more armor and horsepower.

“This truck was built to solve problems from the last war — which, by the way, is still going on — but future wars will be different,” said Matthew Schmidt, who teaches national security at the University of New Haven and has taught at the Army War College.

“A heavily armored vehicle is an asset if the villagers are angry at you,” Mr. Schmidt said, “but in any real conflict against a foe like Russia or China, all armor will quickly be destroyed. In those wars, the advantage will go to speed and deception.”

Even so, if the next 50 years look anything like the last 50, with American troops more often called upon to fight smoldering insurgencies than conventional armies, the JLTV’s thick armor is likely to save lives.

The truck will also be a far more comfortable ride for the men and women who do the fighting. It has seats designed to fit the bulky body armor and backpacks that soldiers now wear, and unlike the underpowered Humvee, it has air conditioning that actually worked in the sticky heat of a late-summer morning at Fort McCoy.

Sergeant Anderson barreled down a winding trail, punching the JLTV’s bullet-resistant tires through deep, sandy ruts and dancing over rocks at speeds that would have rattled a Humvee to pieces.

“This thing is a monster,” she said as tree branches flew by, slapping the truck’s thick sides. “It wants to be driven off road. It loves it. The faster, the more aggressive you are, the smoother it is.”

The truck also comes packed with technology, including electronics that can communicate with fighter jets, drones and other military assets around the globe. In place of a sun visor mounted above the thick blast-resistant windshield, the JLTV has a fold-down night-vision driving system.

Just as important for Sergeant Anderson, the seats can be adjusted to suit her 5-foot-3 frame. That new feature is crucial for the Army, which has a growing proportion of women in its ranks and plans to buy about 49,000 JLTVs over the next decade.

Eager to show a visitor what the truck can do, Sergeant Anderson pulled to a stop at a broad creek cutting through the woods, and pushed a button marked “fording mode.”

The JLTV hitched itself up on its shock absorbers until it had 30 inches of ground clearance, and could easily splash through the creek. The air conditioning and much of the electrical system were automatically shut off to protect them from the water, and the truck limited its speed to 10 miles an hour until Sergeant Anderson switched modes again on the far bank, and the truck lowered to a more stable height.

“This truck is smart; it won’t let anyone damage it,” she said.

When the truck detects mechanical problems, it can limit its speed or shut itself down if necessary. To avoid any HAL 9000 moments when digital safeguards like those might accidentally endanger the crew, the JLTV also has a combat override switch that the driver can use to take all control away from the computer.

“All the soldiers who drive it, they love it,” Sergeant Anderson said. “It’s fun, its powerful, and it’s safe.”

Soldiers generally agree that it’s long past time to replace the Humvee, which was conceived in the 1970s as a roomier, more powerful replacement for the World War II-vintage jeep. Just like the jeep, it was a light troop and equipment mover with no armor, meant mainly for use behind the front lines.

The Humvee was a welcome upgrade when it debuted in 1985, and the distinctive-looking turtle-backed track even became a breakout star in the celebratory atmosphere that followed the brief blitz of the first Gulf War in 1991.

A civilian version — the Hummer H1 — soon hit the streets, and despite reviews calling it underpowered and noisy, it gained a cult following that included Arnold Schwarzenegger and other celebrities. “They’re like the American spirit,” one Hummer owner told The New York Times in 1994.

After the 2003 invasion of Iraq, Humvees proved to be an easy target for roadside bomb attacks, which skyrocketed during the first year of the war. Shredded, blackened carcasses of the trucks became a common sight on Iraqi highways.

Troops in Iraq scrambled to add extra protection however they could, including welding on pieces of junked steel. And the soldiers who generations before had loved the jeep began to loathe the Humvee.

“We were sending soldiers out with no armor — heck, there weren’t even doors —  and guys were putting sandbags on the floor for protection,” said Col. Charles Kidd, who was an operations officer in Iraq in 2003 and is now chief of staff of the 84th Training Command at Fort McCoy. “I was in a soft-skin Humvee at a checkpoint when I got hit. The truck was completely destroyed. It was one of the worst days of my life.”

He patted the cold steel side of one of his unit’s new JLTVs and smiled. “This is a game changer for our soldiers,” he said.

The military responded to the roadside bomb threat by building thousands of “up-armored” Humvees fitted with up to 3,000 pounds of hardened steel, but the extra weight made the trucks slow and prone to breakdowns. And insurgents reacted with more sophisticated and deadlier explosives to pierce the stronger trucks.

The military eventually replaced many Humvees with heavy-duty vehicles called MRAPs, designed specifically to withstand roadside bombs. But they were slow, top-heavy and had limited capability off-road.

Enter the JLTV, a concept approved by planners in 2006 but just now reaching military bases. The Army says it offers the protection of an MRAP with off-road performance approaching that of a Baja racer.

In fact, some in the Pentagon worry that driving it may be too much fun, and that troops will be tempted to turn deployments into the Dakar Rally. Not without reason, perhaps: At Fort Stewart in Georgia, someone managed to roll one of the trucks within three days of the troops there receiving it. 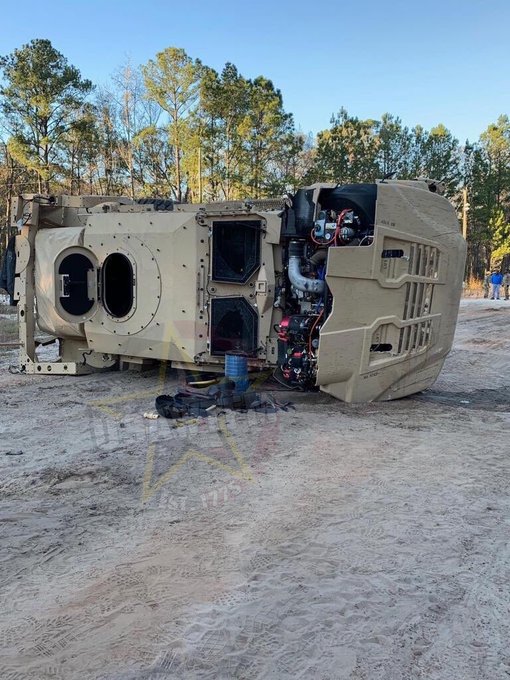 The Army says there have been no more incidents since then. “You know, we rolled a lot of jeeps and Humvees too,” Sergeant Almquist said.

If a soldier does decide to go Evel Knievel, he added, the JLTV’s onboard computer will record and report it — and the daredevil will probably be looking at long stints of weekend duty.