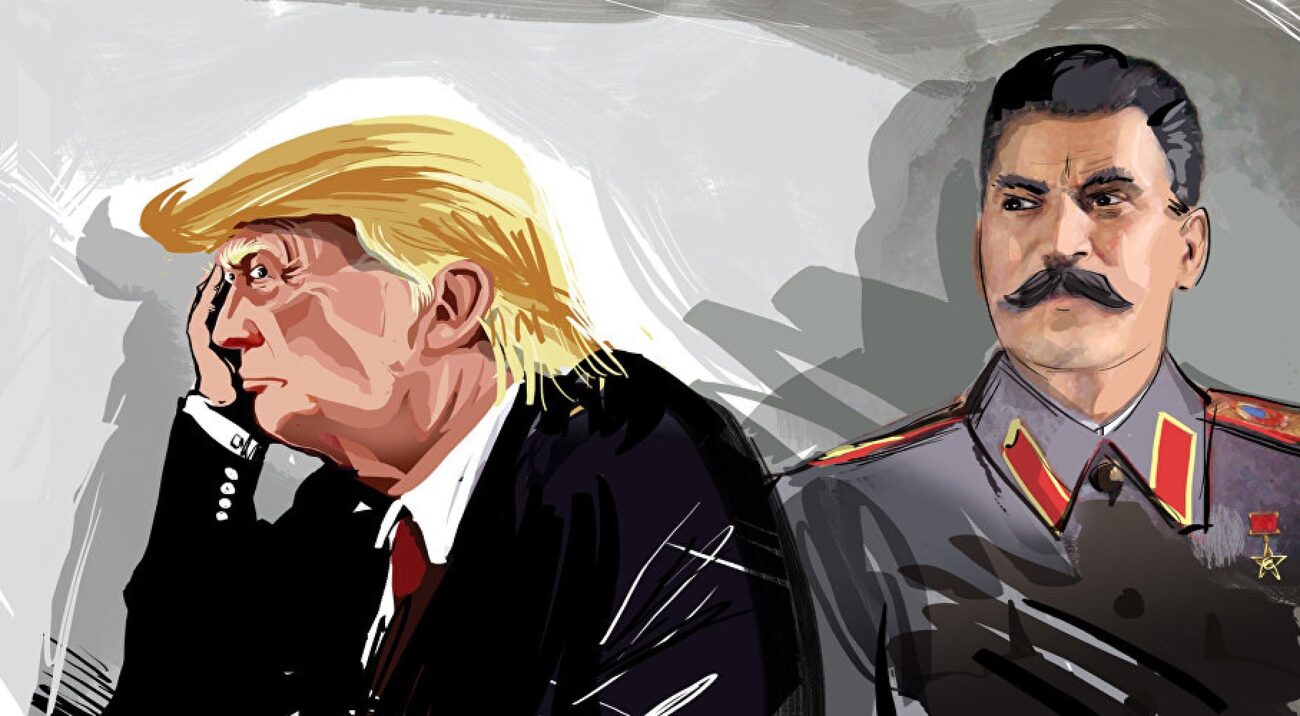 Saving America. Trump in the role of Stalin

President Trump is “absolutely sure” about his victory in the upcoming presidential elections in 2020: he believes that the impeachment strategy of Democratic Party is a failure and will play into his hands. Moreover, Trump expects to establish control over the House of Representatives of Congress next year. Why Trump is so self-confident now?

Americanists all over the world are talking about the banal hatred of «democratic» American intellectuals and «creative elites» for Trump. They are talking about a new «democratic» ideology of Manichaeism – a primitive division of the world into good and evil. According to this model all those who are not with the «democrats» are on the evil side, including American president. So why do intellectuals slide into primitive ideology from ancient times?

Tactically, showing such an open hatred the Democrats become more vulnerable to Trump’s countermeasures. He and his team can accuse the Democrats of using political instruments in an inappropriate way to settle personal scores, accuse them of using US state institutions for narrow party purposes, what can be generally called political corruption. Don’t they understand it? No, they don’t.

Trump, while to responding to allegations against him, calls Hillary Clinton a «lying witch.» So politically incorrect! And these democratic intellectuals – are they treat Trump politically correct, calling him a “fascist” and so on? In general, Trump is rather accurate in his emotional characteristics of Hillary: she is precisely the “witch” who leads the sect of her intellectual and very often homosexual followers. And this “sect” is the driving force of the American “democratic” globalist utopia, which spreads all over the world. So, Hillary supporters attack Trump so fiercely, first of all, because he rejects their utopia. Democratic intellectuals are blind in their rage, preaching a Manichaean approach to all their opponents.

What does Stalin have to do with it?

Today president Trump is fighting a neo-Trotskyist democratic American utopia: both the Democrats and the non-partisan group of the so-called neocons do not only hide their neo-Trotskyism, but even flaunt it.

In the 30s of the last century Stalin solved the same problem: he fought against the original Trotskyist utopia – the idea of ​​a permanent world communist revolution, and dealt with it with the repressions of 1937, which first and foremost fell upon the Trotskyist and international wing of the Bolshevik Party. Trotsky himself was expelled from the USSR in 1929 – feel how strong the positions of the Trotskyists were if the operation against them had been preparing for more than seven years! Does it work out for Trump?

Philosopher and sociologist A.A. Zinoviev considered Western democracy to be the market version of Russian communism; he saw this democracy with his own eyes when he was expelled from the USSR to the West. Under the ruling of President Bush the United States was quite sane, but already in the presidency of Bill Clinton the neocons began to seize power in the «Washington swamp» so the Obama presidency was perhaps the peak of American neo-Trotskyism. It can be said that in this time the era of democracy in the USA ended, and as the neo-trotskists came to power the neo-communist utopia triumphed in its democratic version of «world democracy.» Political scientists call it simply “globalism”.

And then the realist Donald Trump won the presidential election! Can he defeat the utopia of American neo-Trotskyism? Does Trump understand with whom and with what he is dealing? Zealots are ready to organize any provocation if they aren’t able to stop Trump in the elections. After all, they are convinced that they have the right even to kill for the sake of their Manichaean goal — victory of «democracy» all over the world! They always have everything for self-justification: «We had no choice». Fanatics never have a choice. Therefore, Trump will have to become American Stalin in order to save his America.

Trump came to power, of course, not accidently, and he is not alone. The main reason for his victory is a dramatic increase in domestic problems in the United States. Utopias do not work well, they need huge resources just to exist. Even the US resources of the neo-Trotskyist utopia are insufficient, and the USA began to lose competitiveness in the world in spite of all its might. As well as the resources of Russia weren’t enough for communist utopia at the time.

However, the utopian ideology doesn’t tolerate any objections to its values; therefore, it is fundamentally impossible for Trump to agree on coexistence with the «democrats», neither with Obama, nor with Clintons, nor with Biden.

This American history concerns Russia and the whole world because utopias, in order to exist, must constantly expand – seize new countries and resources. The form of existence of utopia is an expansion in both its communist and democratic forms. By this process they demonstrate their success and veracity. When post-communist Russia and China set limits on the expansion of American neo-Trotskyist world utopia, they became not only opponents of “democracy” and “Western values”, but also situational supporters of President Trump. Since neo-Trotskyist utopia is equally dangerous for everyone.

"Saving America. Trump in the role of Stalin" Комментариев нет