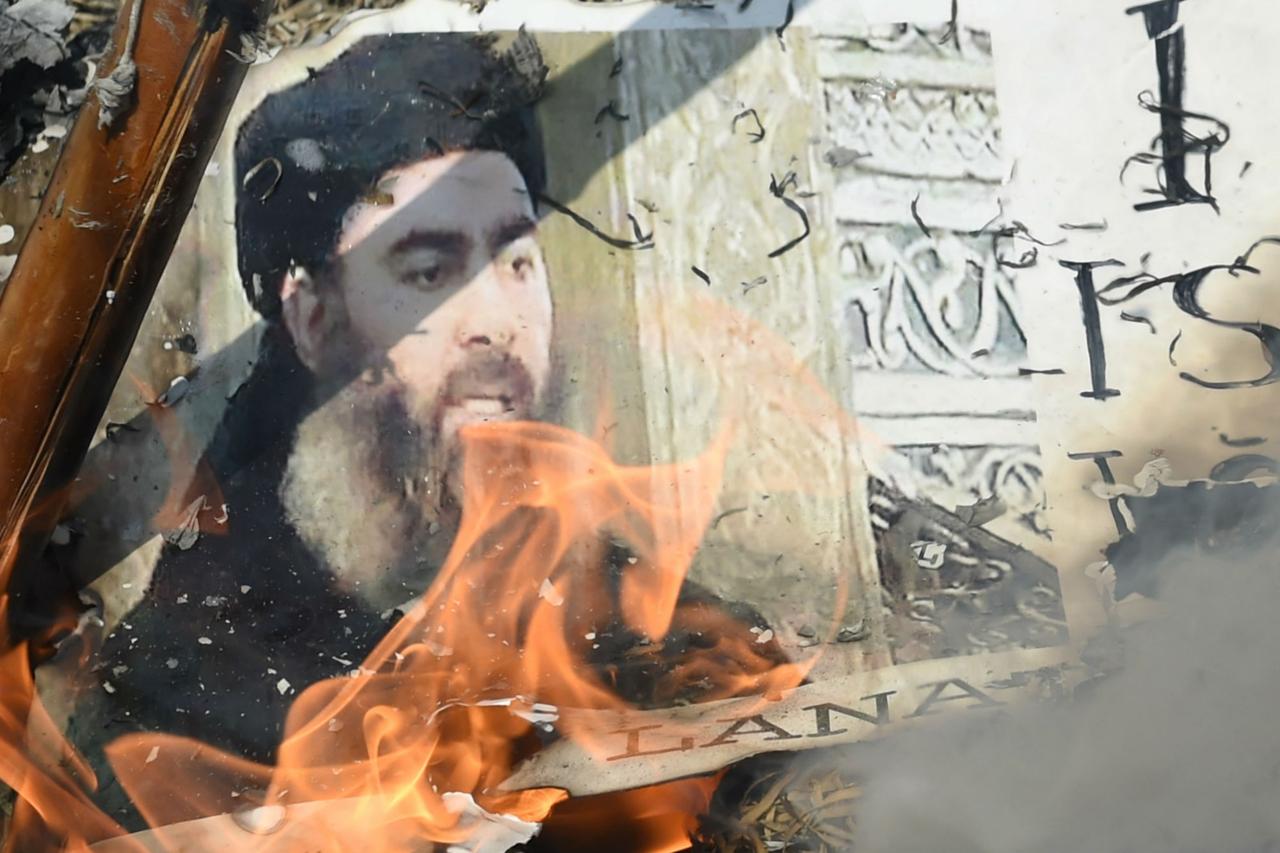 When a black-clad figure strode to the dais in the great al-Nuri Mosque in Mosul on June 29, 2014, few probably expected such a momentous, if hubristic, declaration — namely, that the man had reestablished the Islamic caliphate and that the world’s Muslims owed him allegiance as «Caliph Ibrahim.» The statement from the self-appointed leader — better known as Abu Bakr al-Baghdadi — represented the first serious attempt at reconstituting the caliphate since 1924, when the secularizing Turkish Republic abolished the institution following the Ottoman Empire’s dissolution.

When al-Baghdadi elevated himself to the high office following his Islamic State group’s stunning battlefield successes in Syria and Iraq, he envisioned a legacy in which all Muslims would fall in line and help him establish sovereignty over all the Earth. Al-Baghdadi saw himself as the one to «Make Islam great again» (to borrow a phrase) and expected to achieve the same success that the Prophet Mohammed’s followers enjoyed when they greatly expanded the original caliphate in the late seventh century A.D. But as we now look back at the life — and death — of al-Baghdadi, it becomes clear that he was a failure. Not only did he fail to unify all Muslims and lead them on a global conquest, his only lasting legacies might be his group’s deep split with others in the jihadist movement, depraved violence (against believer and nonbeliever alike), and rape on an epic scale.

A «Name It and Claim It» Approach

The Islamic State grew out of al Qaeda, but the two ultimately became sworn enemies. In the 2000s, differences in strategy and doctrine initially kept al Qaeda leader Osama bin Laden from embracing and supporting Abu Musab al-Zarqawi, one of al-Baghdadi’s predecessors in what would eventually become the Islamic State. In time, al Qaeda upbraided al-Zarqawi; close to a decade leader, al-Baghdadi would go further, ultimately creating a rift within the jihadist movement that became an irreconcilable gulf.

One of the main strategic differences between al-Baghdadi’s Islamic State and al Qaeda was that bin Laden argued for a more gradualist approach to establishing an Islamic polity. The al Qaeda leader argued that it would be impossible for jihadists to overthrow Middle Eastern governments and establish a caliphate as long as the «far enemy» (the United States and its European allies) were active in the region. In the eyes of al-Zawahiri and other al Qaeda leaders, the soundness of bin Laden’s strategy was validated in 2006, when al Qaeda in Iraq (AQI) failed in its attempt to declare an Islamic state; in 2011 and 2015, when al Qaeda in the Arabian Peninsula (AQAP) experienced major setbacks after seizing large portions of Yemen; and in 2012, when al Qaeda in the Islamic Maghreb (AQIM) experienced losses after it declared a jihadist polity in northern Mali.

Al-Baghdadi and his supporters, however, rejected this logic, pursuing a much more urgent approach — «name it and claim it,» if you will. They argued that the time for holding and governing territory was now and that they could use the resources and people of the territory they conquered to help fuel their efforts to expand. This philosophy is what drove al-Baghdadi to so quickly trumpet the reestablishment of the caliphate after seizing large chunks of Iraq and Syria. The Islamic State argued that the caliphate had become a historical fact, that no one could stop its spread, and that all Muslims must join the effort or risk being declared apostates. Al-Baghdadi and his supporters further sought to use the announcement of the caliphate to catapult their momentum forward and help fuel their global expansion efforts. Clearly, tens of thousands of Muslims did respond to their call, but this number was simply not large enough to retain — much less expand — the caliphate. Once the United States and its coalition allies launched their operations to target the Islamic State in September 2014, the movement went into a steady downward spiral.

Al-Zarqawi established the aggressive policies of the group, one of which was to widely declare Muslims who opposed it as apostates (a religious doctrine known as «takfir»), but al-Baghdadi expanded and institutionalized the practice. The group executed tens of thousands of ostensible apostates whose main crime was to work with the U.S.-led coalition, the Syrian regime or the Iraqi government, and incited attacks against the mosques, schools and religious processions of non-extremist Muslims. Unsurprisingly, the group also turned its guns on non-Muslims, particularly northern Iraq’s Yazidi community. Moreover, it destroyed Yazidi, Christian, Jewish and classical religious sites in Iraq and Syria, encouraging franchise groups and grassroots supporters to follow suit. The brazen behavior contrasted sharply with guidelines in 2013 from bin Laden’s successor as al Qaeda leader, Ayman al-Zawahiri, who forbade the killing of other Muslims except in self-defense and outlawed attacks against houses of worship of any faith.

Al-Zarqawi also promoted over-the-top violence — a practice that earned him the nickname «the prince of slaughterers.» Al-Baghdadi, however, outdid his predecessor, as his followers took extreme violence against other human beings to a grotesque new level. The group staged elaborate videos in which Islamic State fighters beheaded lines of people, shot and pushed scores of prisoners into the Tigris River, threw alleged homosexuals from tall buildings, drowned alleged spies in a swimming pool, and immolated a captured Jordanian fighter pilot alive in a cage. And thanks to an unprecedented media operation, they broadcast their barbarity across the globe.

The self-proclaimed caliph failed to bequeath a polity that united the world’s Muslims and restored past glories, leaving behind instead a far more ignoble legacy.

Another aspect of al-Baghdadi’s legacy is the hypersexualization of Islamist extremism. Don’t get me wrong — rape has always been a weapon of war, but al-Baghdadi’s Islamic State took the practice to new depths of perversion. First, the group encouraged thousands of Muslim women and girls to emigrate to the caliphate to become war brides and bear children to jihadist fighter husbands. Second, he legalized the slavery of non-Muslim women as his fighters captured thousands of Yazidi and Christian women and girls. The Islamic State sold or gifted these sex slaves to its fighters and permitted their sale among fighters, resulting in mass rape across areas controlled by the Islamic State. Al-Baghdadi himself even took a kidnapped American aid worker as his personal sex slave. She was accidentally killed in an American airstrike on al-Baghdadi’s hideout in February 2015; in a fitting gesture, the U.S. military named the operation to kill al-Baghdadi in her honor. Jihadist message boards discussed issues like what age a slave needed to reach before her master could rape her and doled out advice to jihadist brides on how to approach their husbands’ sex slaves. This sexual assault on a mass scale appeared to have attracted a large number of foreign fighters, who were lured by the promise of readily available Muslim brides and non-Muslim sex slaves. As the U.S.-led coalition uprooted the Islamic State fighters from territory they had occupied, they encountered large quantities of Viagra. Osama bin Laden, by contrast, might have owned a collection of pornography, but he never condoned the institutionalized and extensive sexual warfare that the Islamic State conducted in Iraq and Syria.

Five years after an international coalition put him on the run — limiting his ability to run the Islamic State’s military operations — al-Baghdadi is now dead. The self-proclaimed caliph failed to bequeath a polity that united the world’s Muslims and restored past glories, leaving behind instead a far more ignoble legacy: a divided and warring jihadist movement, the declaration of vast numbers of Muslims as apostates, sectarian bloodshed, barbaric violence, and the hypersexualization of conquest.