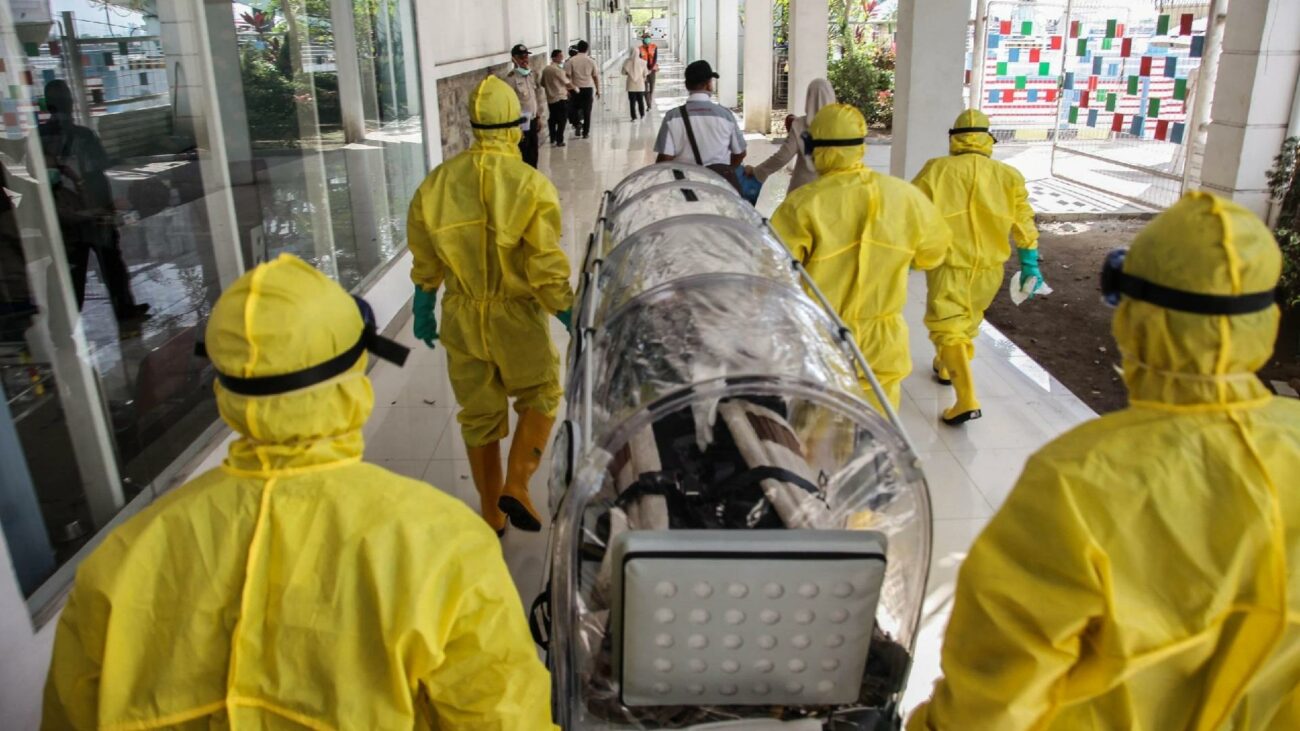 Without question, the new coronavirus has taken a toll on China and many other places in the world, infecting at least 30,600 people and killing 633 as of Feb. 7. But only now, as the Lunar New Year holiday draws to a close, is Beijing preparing to assess just how much economic damage the coronavirus outbreak has wrought, especially as China is central to the global electronics and information technology sector.

China is an indispensable part of the global tech sector, and the new coronavirus has the potential to drastically affect its supply chains and operations. But the virus’ epicenter, Wuhan, is not as crucial as other areas, meaning authorities could minimize the impact of the virus to a few specific product types in the industry if it manages to contain the geographic scope and scale of the outbreak. If the virus does lose its intensity, for instance, the vast majority of the tech sector’s operations, especially in cities in Jiangsu province and Shanghai, might suffer only limited impacts.

Ultimately, the breadth of the impact depends on how far the virus spreads beyond its current location. Hubei province and its capital, Wuhan, are not critical nodes for the vast majority of China’s electronics sector. But neighboring provinces, including Shaanxi, Henan and Jiangxi, are all home to cities that are prominent in the global technology sector, while the provinces with the second and third most confirmed cases so far, Zhejiang and Guangdong, are arguably China’s two most critical areas for tech. For the moment, the risk of the new coronavirus to such provinces is somewhat limited — but all that depends on the success of China’s containment strategy in Hubei: For if the outbreak continues, it would have a monumental impact on China’s tech sector, resulting in significant shortages.

A Limited Effect on Tech — For Now

If the worst of the virus remains centered on Hubei, then the impact on supply chains for the Chinese — and, thus, the global — tech sector is likely to remain relatively limited. In 2017, Hubei produced less than 1 percent of China’s overall integrated circuit production and just 1 percent of the country’s overall television output. The following year, the province accounted for only 2.4 percent of the country’s mobile phone output and 3.6 percent of its microcomputer equipment — two goods for which China’s share of global production isn’t high. Undoubtedly, there will be individual supply chains that will lack components as a result of the quarantine in Hubei, but large producers of goods like circuits, TVs, mobile phones and microcomputer equipment would be able to find suppliers outside the province over time if necessary. 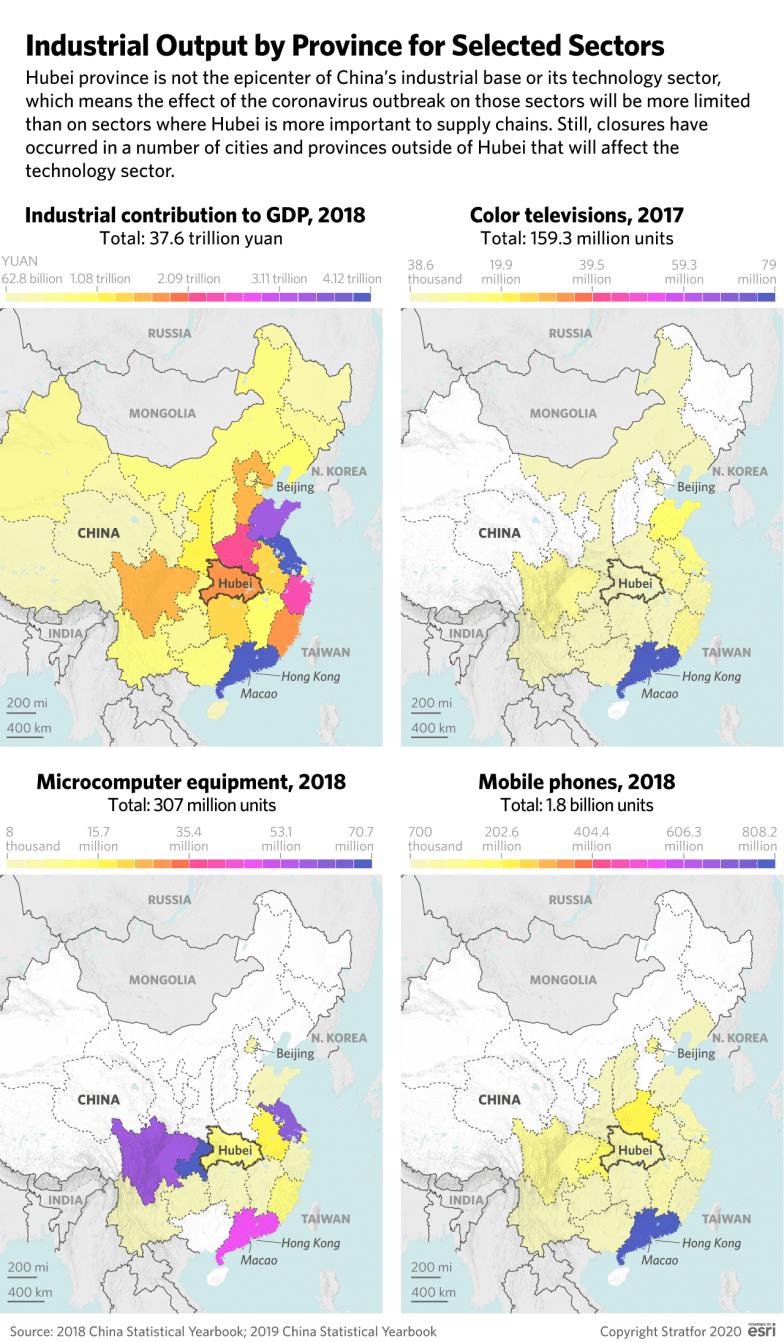 But while Wuhan sits on the margins of China’s semiconductor industry and broader tech sector, a prolonged industrial shutdown would have three important implications. First, China has penciled in Wuhan as a key location for domestic semiconductor manufacturing. There are two primary companies currently operating in Wuhan, primarily in the Donghu New Technology Development Zone. The more established company, Wuhan Xinxin Semiconductor Manufacturing Corp. (XMC), operates a small, 300 mm fabrication plant and functions as a contract pure-play foundry for the semiconductor industry. The other major semiconductor firm is Yangtze Memory Technologies Co. (YMTC), which was founded by China’s Tsinghua Unigroup and is now owned by several other public investment funds, including the National Integrated Circuit Industry Investment Fund, colloquially known as China’s «Big Fund.» YMTC acquired a 100 percent stake in XMC in 2016.

Both XMC and YMTC are presently building two new, large facilities that will boost Hubei’s overall production capacity by a factor of nearly 15. That, ultimately, will make Wuhan one of the pillars of China’s long-term push to achieve greater self-reliance and global prominence in the semiconductor sector — especially in the memory segment of the industry — and a key city in the country’s Made in China 2025 initiative. Before the outbreak, XMC and YMTC had ramped up construction on the facilities, but the companies could now slow down the building process or delay it by several months — if not a year. But once fully operational, YMTC’s Wuhan plant will be China’s largest memory semiconductor chip plant, with a planned capacity of 300,000 wafers per month. And with their Wuhan investments, both XMC and YMTC are focusing heavily on 3D NAND memory chips, which are central to China’s push for self-reliance in chip production as they are an integral component of smartphones and other mobile devices. There are only a few companies that specialize in 3D NAND memory chips, such as South Korea’s Samsung and SK Hynix, Japan’s Toshiba and the United States’ Intel and Micron — the latter of which Tsinghua Unigroup tried to buy in 2015 before running into opposition from the Obama administration. Thwarted, Tsinghua Unigroup formed YMTC instead.

The second key implication will be the more acute impact on China and Wuhan’s optical fiber industry, which accounts for roughly 20 percent of China’s overall output in the sector and, according to officials in the city, boasts a global market share of 25 percent. As a focal point for China’s fiber optics industry, the Donghu New Technology Development Zone has referred to itself as «China Optics Valley» thanks to major firms like Wuhan Yangtze Optical Technology Co. (YOTC) — the world’s largest supplier of optical fiber preform, optical fiber and optical cables — Fiberhome Technologies and Accelink Technologies. While there may be some global inventories that can withstand a limited, weekslong outage in the Wuhan fiber-optic sector’s production capacity, a shutdown that lasts more than a few weeks could substantially hurt supply chains in the industry.

Finally, Wuhan is a leading center for research and development in China’s technology sector. At the university level, Wuhan is home to Wuhan University, which is consistently ranked among China’s top five universities, as well as the Huazhong University of Science and Technology, which is invariably among China’s top 10 research universities and the operator of the Wuhan National Laboratory for Optoelectronics. Wuhan is also the site of research and development centers for Hon Hai Precision manufacturing (also known as Foxconn), United Imaging, Tencent, Huawei and Xiaomi (which opened its second headquarters in the city in December 2019), but the outbreak will halt new R&D endeavors, potentially setting China back in terms of novel advancements — especially if Wuhan suffers a long-term decline in overseas visitors because of its damaged reputation even after the outbreak subsides.

The Consequences of Contagion Beyond Hubei

Unsurprisingly, if the provinces beyond Hubei continue to suspend their industrial activities, the ramifications would be much more severe for China. Many of Hubei’s neighbors are crucial tech hubs, and the three provinces that have witnessed the next most cases, Zhejiang, Guangdong and Henan, are particularly big players in the sector. Already, a number of these areas have delayed the resumption of operations after the end of the Lunar New Year as a precaution, pushing back the start date from Jan. 29 to Feb. 9. Apple, for instance, has noted that orders for 45 million AirPods are at risk because of the measures necessary to contain the virus.

Hangzhou, the capital of Zhejiang, is the headquarters of Alibaba and one of the key hubs for China’s overall tech sector. In terms of manufacturing, the province is not as critical as some neighbors, like Shanghai and Jiangsu, but it is crucial to the technological development of China’s internet services sector and — together with Beijing — a leader in the country’s artificial intelligence development. But in response to the new coronavirus, Hangzhou officials have reduced and restricted travel in several districts, including the area where Alibaba’s center is located, in hopes of limiting the expansion of the virus. (The technology departments of China’s services sector can at least mitigate the impact of the coronavirus by asking their employees to work remotely.) But if Hangzhou were to suffer a similar outbreak to Hubei, it would likely portend other major outbreaks in places like Shanghai and Jiangsu, as it would indicate the failure of efforts to halt the spread of the virus.

The most important Chinese province for tech, however, is Guangdong, an area that is home to more than 113 million people and major cities like Guangzhou, Shenzhen and Zhongshan. If the virus spreads to such a degree that officials must take extreme measures, it would paralyze the innovation, production and export of tech components in Guangdong. After all, the province manufactures 50 percent of China’s TVs, produces 45 percent of its mobile phones and makes more than 15 percent of its semiconductor and microcomputer equipment.

Henan province, which had registered 851 cases as of Feb. 6, directly borders Hubei to the north. Its capital, Zhengzhou, is particularly important for the manufacture of smartphones and iPhones — in fact, the presence of Foxconn’s largest iPhone assembly line has led some to dub the metropolis «iPhone City.» While its share of domestic smartphones is somewhat smaller, Zhengzhou and Henan province shipped a quarter of China’s total smartphone exports last year, more than half of which were directly from Foxconn’s operations. On Feb. 5, Foxconn issued new targets for 2020 sales, increasing the rate from just 1 to 3 percent this year. That’s down from goals of 3 to 5 percent issued just two weeks earlier on Jan. 22. And in a further measure to check the virus’ spread, Foxconn has vowed to subject any employee who returns from the Lunar New Year holiday from anywhere outside Henan province — not just from Hubei — to 14 days of quarantine.

More likely than not, the impact on tech supply chains beyond Hubei will be limited so long as the number of new coronavirus cases does not reach crisis-level proportions. At present, it appears that the virus will lay low some operations outside Hubei for upward of 10 days, given that many factories are planning to resume operations by Feb. 9. In the coming days, it will become clearer whether further contagion beyond Hubei’s border will occur and, if so, how much it will impact operations outside Wuhan. If the virus does spread more significantly than most suspect, then almost all of China’s tech sector along the Yangtze River Basin will be at risk of more acute disruptions — either from the direct impact of shutdowns or the secondary impact from closures among suppliers. In such a case, factories in China’s technological heartland might remain shuttered long after Feb. 9.