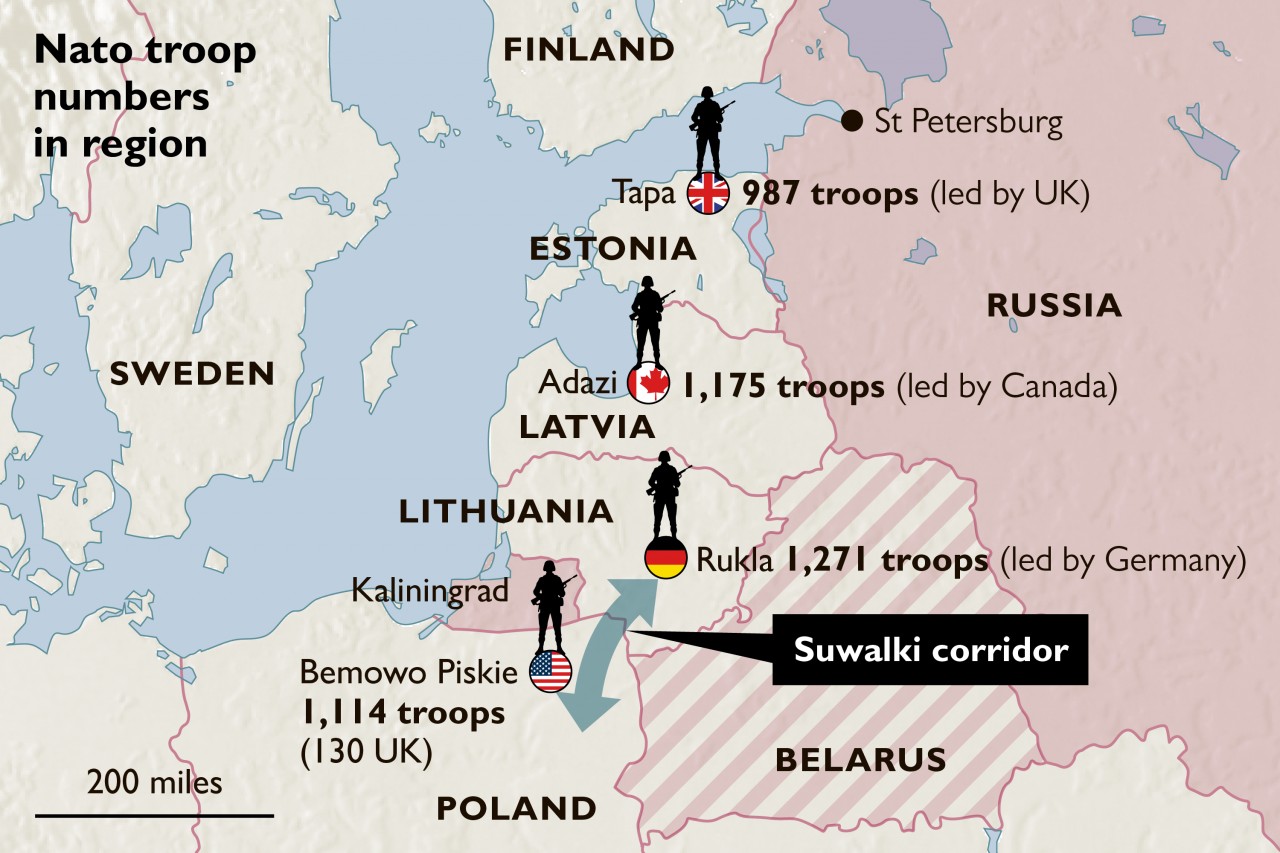 On the territorial fringes of the alliance, where European military might is at its thinnest, an overconfident Putin might exploit the weakness to conduct a new “hybrid” war.

They came trundling through the town of Voronezh in western Russia in broad daylight on Oct. 3. Green army vehicles on flatbed train cars, apparently heading west, toward Russia’s borders with Ukraine and Belarus.

Russia, like all major military powers, frequently moves its military forces around its own territory and deploys them to allied countries for exercises. The Belarusian and Russian armies as recently as September conducted a major military exercise involving 12,000 troops and 950 vehicles.

What’s remarkable—and, for many, worrying—about the October sightings is where they took place: near the Suwalki Gap, where two NATO countries, Poland and Lithuania, have a roughly 40-mile border running through heavily forested territory that separates close Russian ally Belarus from Russia’s enclave on the Baltic Sea, Kaliningrad.

As tensions between Russia and the West escalate and Russia cements its land-grab in Ukraine, U.S. and allied military planners have cast a nervous gaze on this contentious bit of real estate. If the new cold war turns hot, the Suwalki Gap just might be where the fighting starts.

For NATO, that’s a problem. The Suwalki Gap, which some experts also call the “Suwalki Corridor,” is on the alliance’s territorial fringes, where European military might is at its thinnest. But it butts up against a major concentration of Russian forces in Kaliningrad.

“The Suwałki Corridor is where the many weaknesses in NATO’s strategy and force posture converge,” Ben Hodges, Janusz Bugajski, and Peter Doran explained in a 2018 report for the Center for European Policy in Washington, D.C..

Hodges, for one, knows what he’s talking about. A retired U.S. Army general, Hodges from 2014 to 2017 commanded thousands of American ground troops in Europe. Right before retiring he organized NATO’s first major exercise along the Suwalki Gap.

“The gap is vulnerable,” he warned at the time.

With 29 member states including the United States, NATO possesses far more military power than Russia. But many of NATO’s reserves of troops and tanks are based hundreds or, in the case of American forces, thousands of miles from potential battlefields such as the Suwalki Gap. Russia, on the other hand, has concentrated troops and vehicles in its Western Military District, just a short trip by road or rail to the Suwalki Gap.

The imbalance is striking. In 2014 and 2015 the California think-tank RAND simulated a Russian attack across the Suwalki Gap. The Russians should be able quickly to mobilize 25 battalions—around 10,000 ground troops—for the assault, RAND calculated. NATO would be able immediately to mobilize just 17 battalions with around 6,800 troops.

But the troop-count belies the true balance of power. Every battalion Russia could call up for the attack possesses armored vehicles, including heavy tanks. Just one of NATO’s nearby units has any armored vehicles at all. And those vehicles are Stryker armored cars belonging to a U.S. Army reconnaissance unit.

When RAND gamed out the Suwalki Gap battle, the results were chilling, if not surprising. “NATO’s light forces were not only outgunned by the much heavier Russian units, but their lack of maneuverability meant that they could be pinned and bypassed if the Russian players so desired,” RAND explained. “By and large, NATO’s infantry found themselves unable even to retreat successfully and were destroyed in place.”

In RAND’s admittedly extreme case-study, Russia quickly closes the Suwalki Gap, creating a territorial bridge between Belarus and Kaliningrad and cutting off NATO states Lithuania, Latvia and Estonia from the rest of the alliance.

Such a move could incite a major war. Indeed, for Russia that could be the point—to start a fight that it views as inevitable, and to do so on its own terms.

“While Russia is unlikely to start a military campaign just to capture Suwalki, it would undoubtedly try to secure this territory if conflict were to emerge in the region,” Agnia Grigas, a Lithuania-born American political scientist and Russia expert, told The Daily Beast.

There would be warning signs of an impending Russian attack, the experts at RAND and the Center for European Policy explained. Russian battalions could speed in and out of the Suwalki Gap, temporarily holding sections of the border and testing NATO’s resolve.

The possibility of Russia launching small-scale incursions as a prelude to a bigger assault helps to explain the alarm over the October troop-sightings. But secret probes are equally likely. These could involve the same type of “hybrid” Russian forces—basically, intelligence operatives and special forces commandos in disguise—that appeared in Ukraine’s Crimean Peninsula right before Russian tanks rolled in.

These so-called “little green men” could scout out invasion routes, mobilize pro-Russian locals and prepare to seize government buildings and set up checkpoints. Detecting these interlopers is critical for NATO’s defense.

“NATO has to watch not only Russian build-up in Kaliningrad and Belarus but also Russia’s soft power and intelligence operations in Suwalki,” Grigas said.