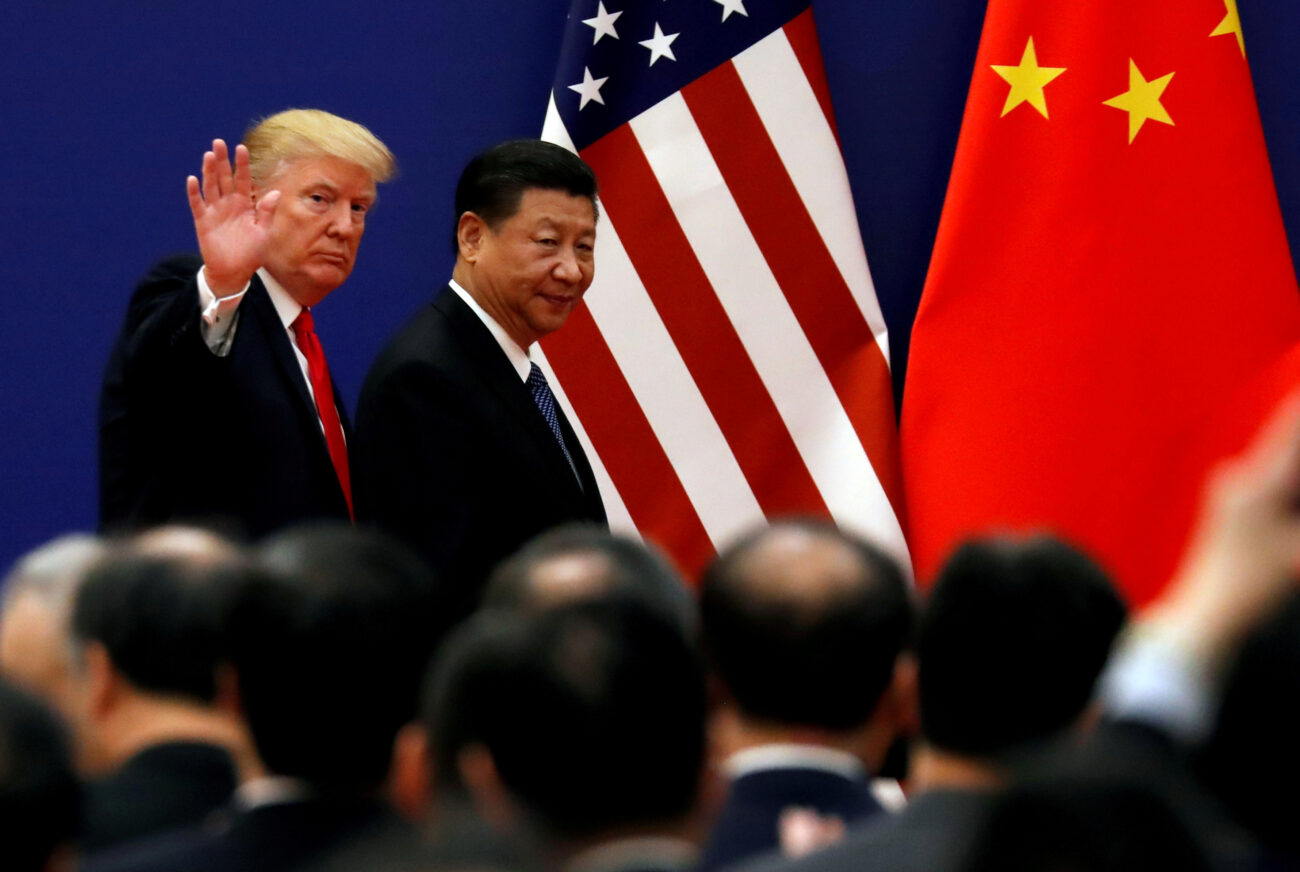 The United States and China have been locked in a technology cold war for several years. The COVID-19 pandemic, which originated in the Chinese city of Wuhan, is now pressuring Washington to make even stronger moves against Beijing by fueling anti-China sentiment among U.S. voters and legislators alike. But the White House’s latest attempt to increase export controls on China and limit Beijing’s overall access to U.S. technology will come at the cost of further fragmenting the global tech sector’s highly integrated supply chain network.

On April 28, the U.S. Commerce Department issued new rules that broaden the scope and dual-use goods subject to U.S. export controls, such as semiconductor manufacturing equipment:

The expanded export controls constitute U.S. President Donald Trump and his administration’s latest attempt to limit Beijing’s access to advanced technologies. As part of this strategy, the Commerce Department placed the Chinese telecommunications giant Huawei on its «entity list» in May 2019, which has since forced the company to stockpile certain manufacturing components by subjecting it to extreme export controls. Increased visa requirements and the threat of more visa restrictions have also recently led to a reduction in the growth rate of Chinese students studying at U.S. universities. Universities have reduced ties to Chinese companies and Chinese-funded programs in technology-related fields, such as physics and engineering, as well.

Amid growing anti-China sentiment due to the COVID-19 outbreak, Washington’s push to limit Chinese involvement in U.S. defense supply chains is unlikely to shift, regardless of the outcome of the U.S. presidential election in November. Recent polls conducted by the Pew Research Center showed that 66 percent of Americans now have a negative opinion of China — a 20 percentage-point jump from when Trump took office in 2016, and the highest rate since Pew began polling the question. Although there is significant disagreement in Congress on Trump’s aggressive trade policy against China, countering Beijing’s tech aspirations and rise has largely become a bipartisan issue. Joe Biden, the former vice president and current Democratic presidential candidate, has heavily criticized Trump’s alleged weak management of Chinese threats, emphasizing he’d take a stronger approach against Beijing should he win the November vote.

The new rule changes could equate to a de-facto export ban on transactions involving strategic technologies with China. The new rules come with presumptive of denial, which means that most export licenses will not be granted without a significant amount of due diligence. The rules are vague enough to allow for denials, even if the end-user only works with the Chinese military in areas unrelated to technology. But the significant overlap between China’s private and non-military sectors — as well as the military and intelligence apparatus in China — will make it difficult to ensure the transaction is, in fact, for civilian end-use (as opposed to military end-use).

Several U.S. tech industries have already voiced concerns about how the expanded export controls could affect their operations and bottom lines. Representatives of the semiconductor industry have said that the rule changes could potentially damage their revenue and exports. Even prior to the new rules, the U.S. Pentagon had expressed reservations about similar rule changes affecting U.S. chipmakers, arguing that they undermine innovation for the U.S. defense sector in the long-term. Many small- and medium-sized U.S. businesses will likely forgo trying to transact with Chinese companies altogether, given the potential risks and the exorbitant costs of due diligence. U.S. tech giants such as Apple, Applied Materials, Google, Microsoft and Qualcomm can afford the compliance costs for most transactions, but the expansive scope of the new end-use definitions could hit potential sales of crucial technologies, such as advanced semiconductor manufacturing equipment, to Chinese customers.

Despite these risks, the United States will eventually move forward with proposed changes, which will significantly affect overseas companies transacting with Chinese companies. Washington will continue to expand the Commerce Department’s entity list, making sales to more Chinese companies subject to more stringent export controls. The United States will also likely modify its Commerce Department’s so-called “direct product rule,” which sets the level of U.S.-made technology and content in goods produced overseas before becoming subject to U.S. export controls. The minimum level is currently 25 percent, which puts most foreign-produced goods involving U.S. content outside export controls. The Trump administration, however, has discussed reducing the threshold to as low as 10 percent. The United States will continue to expand diplomatic pressure on foreign countries to deny export licenses for strategic transactions to Chinese companies as well. In one major success earlier this year, Washington diplomatically pressured the Netherlands to pull an export license for the sale of extreme ultraviolet (EUV) lithography machines produced by the Dutch semiconductor firm ASML’s to China’s largest chipmaker, Semiconductor Manufacturing International Corporation (SMIC).

U.S. pressure will also focus heavily on influencing Taiwan — which is home to the world’s largest independent semiconductor foundry, Taiwan Semiconductor Manufacturing Company (TSMC) — to reduce TSMC’s business with Chinese companies. TSMC produces Huawei’s most advanced chips using ASML’s EUV machines. According to internal Taiwanese reports, TSMC has also found that the level of U.S. content is 9-10 percent, putting it near the White House’s proposed new threshold. If the Commerce Department determines that TSMC’s most advanced chips are not subject to U.S. export controls, Washington will attempt to diplomatically block the sales or expand the scope of export controls further, as TSMC’s older generation of chips use higher levels of U.S. equipment.

Many global tech firms, including TSMC, will adopt strategies that compartmentalize their U.S. and Chinese-centric businesses, or take steps to reduce reliance on the United States due to their high dependence on Chinese consumption. China’s growing middle class, economic expansion and increased demand for electronics has made it the fastest-growing destination for tech products and services. Increasing sales in China has become a critical growth vertical for most tech companies, particularly those in Asia. TSMC is highly dependent on both sales to China and the United States. Sales to Apple alone accounted for roughly 23 percent of the firm’s revenue in 2019. But TSMC’s sales to Huawei — which accounted for 14 percent of its revenue last year — are also growing fast.

China’s dominance in the manufacturing, testing and prototyping of electronics will make completely separating China from U.S. supply chains difficult – or at the very least, more expensive. This could ultimately raise the costs and reduce the number of choices for U.S. consumers, as U.S.-destined goods are built using less efficient supply chains.

Beijing will expand financial and government support for the tech sectors, and will continue to make technology the focal point of its industrial strategies such as Made in China 2025 and China Standards 2035. To boost indigenous capabilities, Chinese firms will have little choice but to continue aggressively attempting to access U.S. and Western-made strategic technology by conducting industrial espionage, as well as overseas mergers and acquisitions. China’s aggressive techno-nationalist response will only embolden U.S. attempts to reduce its access to foreign technology by reinforcing Washington’s opposition to Beijing’s state-led industrial policy.

China’s indigenization strategy for semiconductor development, however, has so far proven exceedingly slow and is likely to remain far behind international peers. Most Chinese companies are currently five-to-ten years (or several generations) behind leading technologies in areas such as semiconductor manufacturing. This leaves Huawei and others with little choice but to continue importing high-end products from companies such as TSMC and Samsung in the short-to-medium term. Even if China successfully reduces its reliance on TSMC and foreign chip makers by building up its semiconductor manufacturing industry, it will take even longer to develop sufficient alternatives to foreign-made semiconductor manufacturing equipment, such as that produced by ASML. Until then, Beijing’s tech sector will thus largely remain at the mercy of U.S. policy shifts.